Angel City is in crisis. Crime is skyrocketing, three gangs have arisen to claim the streets, and the government is nowhere to be seen. Day-glo punks in garish clothes tote knives and pipes through the neon-inked rain slick alleyways. You have lost loved ones, your livelihood, or worse, to this. The people are terrified to leave their homes, and are entirely unsafe within them. You are the only one who can stop this and return justice to the city.

TRUST ONLY YOUR FISTS

Justice Sworn is a solo play tabletop RPG that we are releasing on an early access model. The game you can buy right now is complete, and a blast to play, and as we raise funds from sales of this book, we'll update, add new content, and hire people to flesh out this awesome book with new abilities, content, art, and more. Check out the list below for our goals!

This work is based on Ironsworn (found at www.ironswornrpg.com), created by Shawn Tomkin, and licensed for our use under the Creative Commons Attribution 4.0 International License

Cover art by the incredible Donald Kirby. Please go buy some art from him rn.

In order to download this game you must purchase it at or above the minimum price of $15 USD. You will get access to the following files:

Support this game at or above a special price point to receive something exclusive.

A freebie copy for folx down on their luck. Will refresh these with some regularity.

Purchased my copy. Awesome work. Would VERY much appreciate a nice, extended example of play that covers as much as it can. Also, a sample adventure, maybe. And the rules for group play would be great as well.

This is a great game! already got it through the solo but not alone bundle and would love to purchase the game again to help but the only option I'm getting is paypal which I do not use. Any reason why that´s the only option?

Hey! That's so sweet of you, thank you! Unfortunately I have no idea why that'd be happening. I'll poke around and see if there's anything I can do to fix it, but I deeply appreciate you trying regardless!

Just finished reading this - super cool! I'm a little lost on the concept of control, would reading Ironsworn clear that up for me?

Thank you so much! Very possibly, I struggled with Control when I first started playing Ironsworn too, it helped me to think of it as a token I gain or lose during actions, so if an action says "Gain control" I get the token, and if it says "Lose Control" I lose, and several moves require you to have the token before you use them. Like I said, took me a little while to get it but it's a really satisfying way to model that narrative push-pull of a fight.

For the next version update on this, I'll include an example of play around Control to make sure its a little clearer, thanks for the feedback!

Oh yeah, the token thing really clears it up! Thanks for responding - I’m really looking forward to playing with this and seeing where it goes! 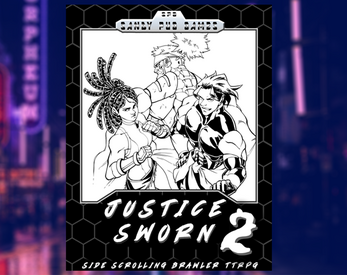