The Final Gods Of The Lost Belle is an RPG played entirely through twitter, using twitters interface and mechanics to help you and up to 199 million friends weave a story of mysterious tunnels and strange magics. Delve into the Great Machine, battle the machinations of spurned gods, and seek out the truth of the Lost Belle.

This game includes an extensive twitter-based resolution mechanic, powers for both chosen Gods and their spurned demon counterparts, and a huge set of keywords for building unsettling underworld labyrinths on the fly.

Belle was once a world of magic and splendor, and in some corners, it remains so. The arcane spread across this world like a ravenous ocean, aided by naturally forming geodes rich in occult symbols, and microscopic life forms who’s billions of legs wove intricate casting rituals as they moved. Sourcery was rich in the air, and from that sourcery, Gods and myths rose.

In Final Gods Of The Lost Belle, you find Belle at the end of its golden age. A million years of plenty made people complacent, and they ignored all the signs of the collapse of this fragile state till it was far, far too late. Belle is still a habitable world, still one thick with luster and strangeness, as you might expect from a world at the tail end of a million years of magical society, but it’s growing more mundane by the hour. Most can not cast spells anymore, and those that can remember their powers unmade reality with a casual flick of the wrist. Not anymore.

This is largely regarded as a Good Thing by the majority of people in Belle. It’s not hard to imagine why.

In the heart of Belle, is a large golden gong, in a shape you’ve never imagined. It slowly turns in the bowels of the earth, awaiting someone to ring it. Nobody quite knows what would happen, if one were to find it, but every remaining God appears desperate to have that happen, and they choose champions with disturbing regularity to delve into The Great Machine, and do what they deem must be done. Which is where you come in…

The Final Gods Of The Lost Belle does not require purchase to play. Simply look for one of your mutuals tweeting the phrase "THE BELL TOLLS!". Check to make sure they haven't moved past the God Selection process, and reply with the words "And I Awaken Once More." The player will contact you with a free copy of the game.

In order to download this game you must purchase it at or above the minimum price of $7.50 USD. You will get access to the following files: 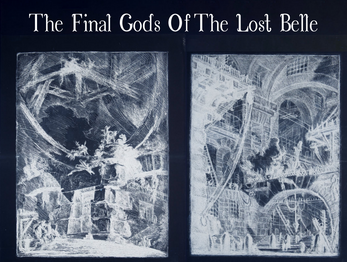 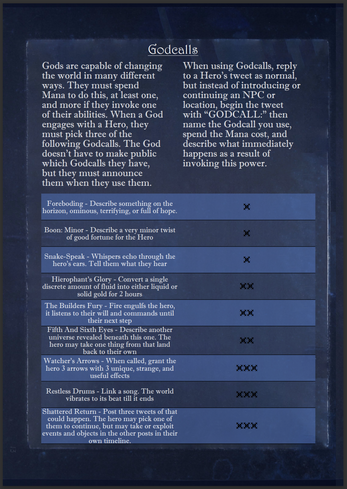